On Saturday 16th July we held our first ‘Imagine Hackney’ workshop for young people as part of the Shoreditch Festival. Working with the theme of this year’s festival which was all about Regents Canal, we decided to run a workshop titled ‘Canal Sounds’ in which participants would create a Soundscape of the canal. During the workshop, the participants first learnt about the history of Regents Canal and of soundscapes. Recording soundscapes was part of a movement started in the 1970s by the World Soundscape Project who advocated that recording the sounds made by the built environment is equally important to recording the built environment via photos or drawings. Armed with this knowledge, the participants set out along Regents Canal to record occurring and found sounds. These sounds will later be organised into a composition, which will appear on our website soon. 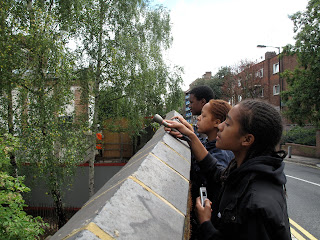 Posted by The Building Exploratory at 14:49