On Saturday 13th November, pupils from Christchurch Primary School, staff from the City Bridge Trust, the Senior Bee's and the BE team came together to accompany our bridge design float through the streets of the City in the Lord Mayor's Show.

The show was the culmination of months of hard work. Project coordinator Lizzie Edward said "this has been such a great project to work on. The children, the Bee's and all of the team have been fantastic and it's amazing to see it all come together today for the show!" 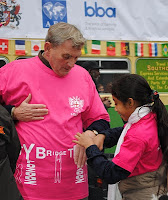 The project was made possible by the City Bridge Trust, whose grants support community projects in London. The float was designed by Freshwest to reflect the City Bridge Trust's concept of 'linking London communities'. The project itself also had this idea at its heart with intergenerational sessions between the school children and the Bee's playing a key part.
Posted by The Building Exploratory at 15:03 No comments:

With the preparations for the Lord Mayor's Show on Saturday the 13th November in full swing, the Senior Bee's got involved in the fun through a fantastic talk and a bridge building challenge with project leader Lizzie Edwards.

Lizzie gave a wonderful talk on bridges and talked the group through the float design, explaining the process the Christchurch primary students and the designers went through to come up with the end product. The Bee's then took part in the same bridge building challenge that the students tried at the beginning of the project. Much laughter, friendly competition and team work saw the Bees' rise to the challenge and put what they had learnt about bridges into practice. 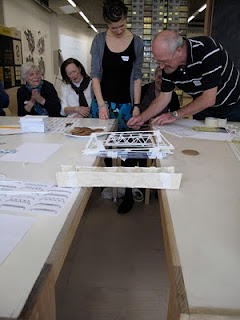 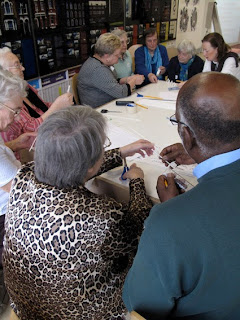 Now everyone is getting excited about the show and we look forward to some of the Bee's joining the students and our team as we accompany the float through the streets of the city next Saturday.
Posted by The Building Exploratory at 11:30 No comments: